Ral1000
June 17 in Contests and Challenges

About a month ago, a few other cardsmiths and I began working on a new custom set under the very general theme of "music." I came into the MTG Cardsmith community discord with a very rough idea of what I wanted to do, and over the past few weeks we have jumped far ahead of what I ever expected to achieve on the forums.

Throughout our discussions, we developed a basic outline of the plane, four great appropriate mechanics, and an empty skeleton for the cards. However, this stage is not for the cards themselves. It is an open discussion about the themes, stories, and logistics within the plane itself. If you are not the kind of person who likes to take time and develop storylines and plots, keep on reading (Or you can just skip to the end). There will be a place for everyone here...

(Credits to @ningyounk and one of the many Rezatta threads for that diagram.)

You can see several stages of design here, currently used by our favorite company, Wizards of the Coast. If you are unfamiliar with the concepts, allow me to break down the stages we will be using for Ozorion:

During this first stage, I introduced the general idea for the set. While the general outcome was supportive, I would love for more people to join if they can!

While looking at some original themes for the set, we settled on four interesting mechanics (See below). An important thing to note is that these are not nearly set in stone, as we are only beginning the Vision Design phase now. Anything can be changed, and I'd be happy for anything anyone has to throw at us! (:

If you read the title to this discussion, you will note that we are in this second stage. But what exactly do we want to accomplish?
- We want to further develop the spirit, and the general "feel" of the set. (Does that make sense?)
- We want to develop stories, characters, deities, kingdoms, ect.
- We want to set the main goals of set design and the mechanics we will use in stone.
- We want to (Quite possibly) create the first draft of the set, beginning with the commons. While this may seem daunting, it is of course a necessary part of each design process.
- Am I missing anything? Feel free to post it!
This is meant to be a creative, relaxed process in which we have fun sketching out our world and our cards.

This will be a fun, lively phase in which we utilize the skeleton and all of the concepts we have developed in order to sit down with the cards and think. The set will contain around 250 cards, as is the usual in standard at this time.

This stage speaks for itself- We will be play testing the set on some kind of a platform which I have not yet discovered. This is for the sole purpose of determining if the set is fun, interactive, balanced, and engaging.

This is the part where I completely lost my train of thought... Oh that's right. The mechanics.

Not much more to say at this point, here's what we're working with!

Harmonize N (Put N +1/+1 counters on target noncreature artifact, enchantment, or land you control. It becomes a 0/0 song creature in addition to its other types.) 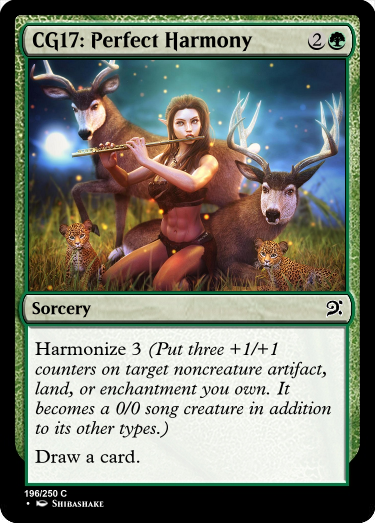 This mechanic is meant to reflect the general theme of music, as well as something we've been working with: The plane at first glimpse may appear to be empty, however it is really always pulsing with music, and the entirety of it appears to be "alive" with music... A work in progress.

Enlighten (As you cast this spell, you may tap an untapped creature you control.) 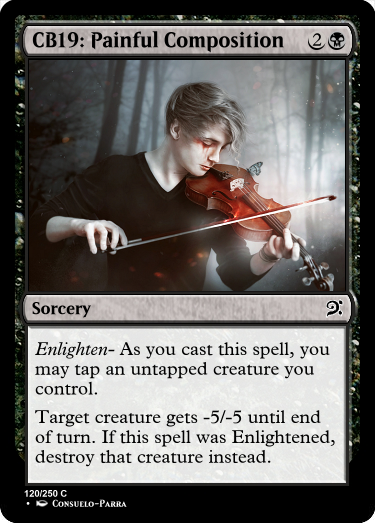 We tried for a while to find a mechanic that fit the overarching "Enlightenment" theme of the set. However, as this theme is no longer a central part of the plane, I would be happy for suggestions for new name we could give it.

OK, so those were the two new mechanics... We also decided on two older ones that haven't been seen in quite a while.

Rebound (If you cast this spell from your hand, exile it as it resolves. At the beginning of your next upkeep, you may cast this card from exile without paying its mana cost.) 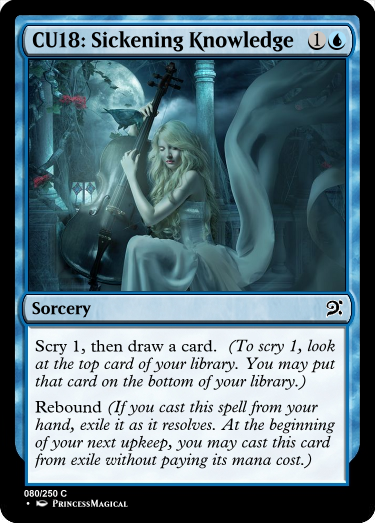 We thought this would go pretty nicely with the "constant movement" theme of the set. We were experimenting with several ideas in its place, however this turned out to be the most simple and fun. 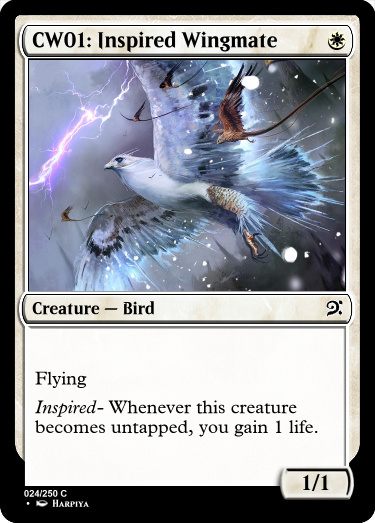 This also fits well into the set, as the music of the world continues to "inspire" its inhabitants. It also goes quite well with Enlighten, and they form a balance of tapping vs untapping.
«1234»